Set up WildFly, PostgreSQL, and Maven with Docker Compose

In many of my previous posts I have resorted to manual installation and configuration of software in my own computer. This was the case of WildFly and MySQL, which cost me more than my fair share of headaches. Manually installing software often runs into troubles when students try to replicate the same setup. In many cases the installation cannot complete  with success on their laptops for some obscure reason. Furthermore, the process of installing and configuring is usually cumbersome and not prone to generalization, as one goes through multiple menus taking different options, downloading drivers and so on.
I changed my mind about this approach some time after deciding to embrace Visual Studio Code (VSC) as my companion text editor (at least for everything related to code, be it LaTeX, Python, or Java). I would say that it still performs clearly below a full-blown IDE, like Eclipse, but the familiarity of the setup is also an important advantage, as I switch from one language to the next. It's a kind of trade-off here. At some point I realized that VSC would let me develop on standard Docker containers, i.e., I could configure an environment inside VSC that I could entirely replicate on another computer with nothing but a couple of configuration lines. This is a remarkable achievement that motivates this post.
Here, I'm presenting a docker compose set up with three containers:
For this example to work you need to have Docker installed. I tried this on MacOS and assume that this will work straightforwardly on Linux. Please let me know of your Windows experience.

The general idea is to define a yaml compose file, docker-compose.yaml:
We can see the three services I mentioned. Two of them have the tag "image", which contains a direct reference to the Docker hub container to download (postgres and maven). To prevent the maven container from finishing, we run an interminable script to read from /dev/null. The wildfly service is different, as it builds on a Dockerfile available in the same directory as this yaml file (the "." part). More about this Dockerfile ahead.
One can also see that each one of the containers links to the ones before: wildfly "sees" the database container and may access it using the network name "database", while the command-line service (maven) can see the previous two. I also added port mappings for the database and wildfly, as we want to access the database, and mainly, the WildFly server from our own browser on the very same ports 8080 and 9990.
In this example, I'm setting the environment of the database directly, which is not perfect, because this configuration file provides direct knowledge of the password. It might be better to use environment variables or refer to an external file with the environment configuration. Finally, notice the volume we are mounting in the command-line service: the ".." directory will show up inside the container as "/workspace"; whatever you write starting in the previous directory of your computer will show up in the /workspace and vice-versa. The main idea is that you can compile inside the /workspace in the container, using maven, while keeping everything, including the results outside the container. The container may go, but the results will stay.

We need this file because the base wildfly container doesn't do everything we need. We must set up an administrator account and a data source. The administrator part is easy, but the data source not so much. The challenge is that we must first start WildFly, make sure that it is running and---only then---install the data source. Hence, we may resort to a shell script called "wildfly-init-config.sh" for that purpose.

This script starts WildFly in background making sure that the sockets bind to address 0.0.0.0, to enable connection from our own machine. Then, it tries to deploy the PostgreSQL JDBC driver and install a data source, at most 5 times, until it succeeds, because the connect may fail a couple of times while WildFly starts. This gives 25 seconds for WildFly to start. In the end we just hang the script to prevent the container from finishing using no CPU in the process.

We now need to run a couple of commands on the command line. One to build the images and run the containers:

This may take a while depending on your network speed. Once this finishes, we may try the addresses localhost:8080 and localhost:9990 on the browser, to get the following results, starting from the 8080 port: 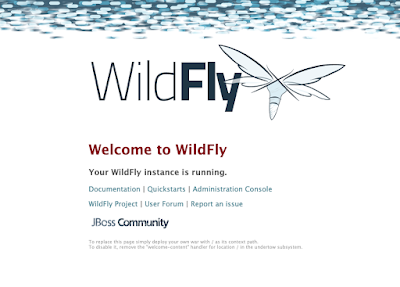 And the data source that passes the connection test to the PostgreSQL database:

The next command is optional and allows us to enter the container that has maven, such that we can run maven itself. In the end, this was what we were looking for, a fancy way of running maven with minimal installation of software on our own operating system. To do this, we start by looking for the identifiers of the running containers:

You can now run maven having a view of your parent directory ("..") inside this container under the name "workspace":

Another very important feature is to look at the logs, specially of WildFly, as these often give precious indications of what is wrong. For example, a shortcoming of this setup concerns Java versions, as the maven container is ready for Java 17, but the WildFly class loader doesn't seem to accept anything above 11. While Maven was giving me some ambiguous error message, the logs immediately showed the problem. To look at the logs we may use the following command:

being d7882574eb38 the WildFly Docker container.
Note that you must take the versions problem into consideration when compiling the source code. As soon as I changed the Java compiled version to 11 in Maven everything ran smoothly. As I played around a little bit with this version of WildFly, it seemed to me that it is highly unstable and prone to crash. You may, therefore, look for a better version.

Instead of doing everything on the command line, you may use this compose set up in IDEs or text editors like VSC. In the case of VSC, this will make part of VSC work inside the container, the VSC server, which is thus able to reach the workspace directory and the tools available in the command line container, namely maven. For this to work, include the following file, named "devcontainer.json" close to the previous files, all inside the same directory named ".devcontainer":
Notice the references to the docker-compose.yaml file and to the service. I have also installed a few extensions. Once you issue a "reopen in container", the entire VSC environment will be ready for maven+wildfly+postgresql. You can see the result here (notice the orange rectangle in the lower left corner): 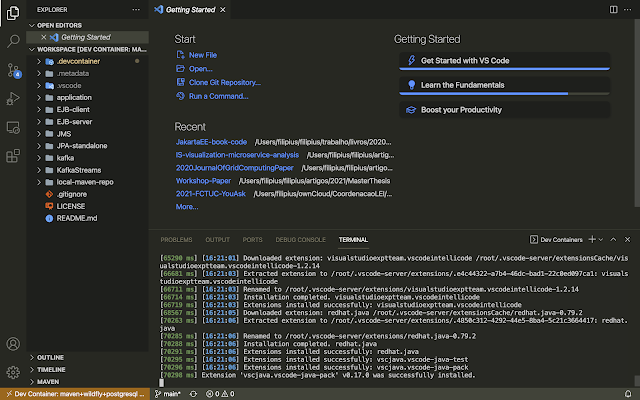 Should you open a terminal, it will be inside the maven container.
Posted by Filipe Araujo at 9:42 PM 1 comment:

In this post I'm going to do a server-side REST project to deploy on an application server like WildFly. A standard Enterprise JavaBean does all the heavy lifting in this project. We have three classes to take care of data and make the case more interesting. First the Material class:

Each course has materials. I use JAXB annotations, because I want to serialize data as XML (as well as JSON, but I'm using the defaults for JSON):


I have an Enterprise JavaBean that initializes some data to give back to the REST service. In practice, this EJB would typically go to a database to get the data in need:


And then a class to define the root application path:


Finally, the pom.xml. You may specify the goals (mvn) clean install wildfly:deploy for WildFly. Assuming WildFly is running and configured with the default ports, this project will be immediately deployed.


Then, you may go to a browser to invoke the three URLs I show in the root resource class to get the following results. One should notice the awesome fact that we are getting XML and JSON as requested using nothing more than a couple of annotations. Java EE makes that for us:

Posted by Filipe Araujo at 4:36 PM No comments:

This post is an update of another post I did a few years ago before I used Maven. My goal is to create a simple SOAP Web Service and use it from a client. In theory, the main difficulty is the Maven configuration, but I found it troublesome to successfully conclude the client, due to a persistent problem with the Java versions. Hopefully I can provide some help in the process.

The source code of the server is not very realistic, but this is only for illustration purposes. I wrote the server and completed all the necessary steps on the server with Java 12 and WildFly 18. For the client I was forced to use a different version. Since I am using a Maven project, I started a new project from scratch without any archetype. The project had this structure: 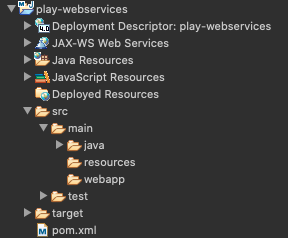 From here I created the Java code for the server:


Next, I need to write the pom.xml file. This has a few important details: the packaging, the ws dependency and the plugins that control the war packaging and the deployment on a WildFly server (keep reading if you don't use WildFly). I configured the file for it to work without a web.xml file inside the webapp directory:


If you use WildFly, once you start the server you may then set the following maven phases:

to compile the project, build the war file (into the target directory) and finally deploy the project in WildFly. You may skip this last step to get the war file and deploy it manually in your server (even in WildFly).

Once this is properly set up you should be something like this in the server console:

You now may go to the browser and look for the following URL: http://localhost:8080/play-webservices/MyAgenda?wsdl

to get this result: 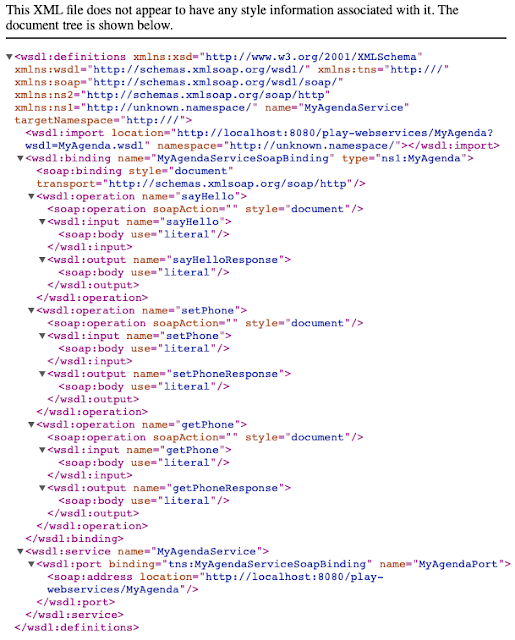 The client, in a different project, is as simple as the server (mind a detail about Java versions below):


Unfortunately, it will not compile because it misses a number of classes that we must generate with the help of the wsimport tool. This brought me to a problem: wsimport ceased to exist in the newer Java versions as a standalone program (refer to my previous version of this example for additional details). We need to execute wsimport via Maven. Sadly, due to a problem I could not use Java 12 and had to revert to Java 8 (which would probably have wsimport by the way...), but kept the principle of using Maven (hopefully this will be fixed in future versions of the jaxws-maven-plugin):


Once we run Maven with the goal "generate-sources", we get the following additional files (in target/generated-sources/wsimport), possibly after refreshing the IDE: 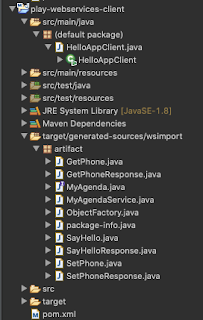 We are now able to run the project and the get the following (astounding!) results: